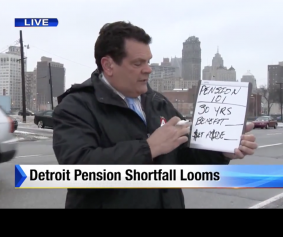 DETROIT – Mayor Mike Duggan announced during the State of the City address Tuesday night that there will be a $491 million deficit in the pension fund starting in 2024.

“Preliminarily it looks to be this, it looks like the EM and the consultants used the wrong assumptions. In particular, they used outdated mortality tables. They assumed people were not going to live as long to make the numbers look more favorable.”

The mayor signed off on the bankruptcy plan over a year ago and was in the meetings when they came up with the numbers.

“It is really hard to understand how consultants being paid $177 million can use outdated life expectancy tables,” Duggan said. “It’s a real problem and it looks like there were numbers put in that didn’t work.”

In the paperwork there is an exculpatory clause. The city can’t sue after the bankruptcy unless the mistake was deliberate and can be proven as such.